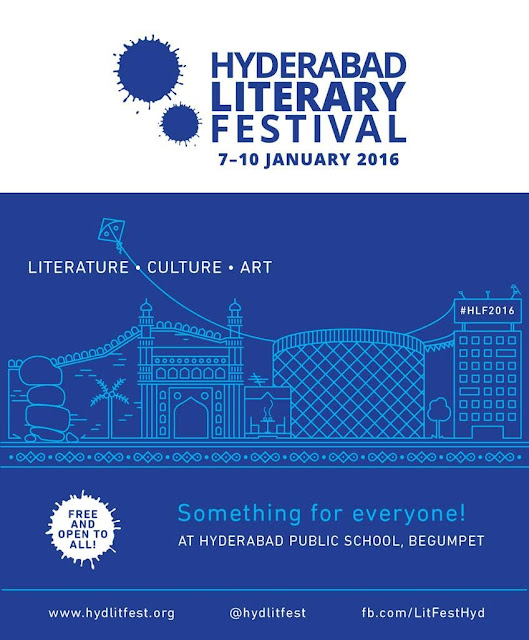 HLF 2016The Hyderabad Literary Festival (HLF) is an annual event that celebrates creativity and literature in all its forms. The festival that started in 2010 draws over a hundred writers, artistes, scholars and publishers from India and abroad, each year.

January 7 – 10, 2016 – with Hyderabad Public School as the splendid venue. The programmes of HLF 2016 include engaging conversations with authors, panel discussions, book launches, delightful cultural events and exciting workshops. The events are open and free for all, inviting the participation of interested individuals as well as a younger audience of school and college students. It may be said that HLF is a festival for all!

These two features of the Guest Nation and Indian Language in Focus complement each other – as the organizers aim to showcase both foreign culture, as well as draw attention to Indian languages and local culture. Each year about a quarter of the participants comes from abroad; HLF 2015 hosted writers, publishers and artists from Australia, England, France, Netherlands, New Zealand, Nigeria, Poland, Singapore, Switzerland, USA, and Wales.

Within six years of its existence it got recognized both within and outside the country. HLF 2015 attracted a number of prominent guests: Javed Akhtar held a keynote on Urdu poetry; Tom Alter performed in Suhail Warsi’s musical Parchhayian; Mahesh Bhatt and Leela Samson discussed cultural pluralism in modern India, amongst several other luminaries.

The festival has emerged as an important event in the cultural calendar of the country. It represents the rich and cosmopolitan ethos of the twin cities of Hyderabad and Secunderabad, bringing together both established writers as well as young and contemporary talent.

HLF 2016 is organized by the ‘Hyderabad Literary Trust’ in association with the Government of Telangana. It is supported by several academic, literary and cultural organizations, as well as publishing houses.

What to expect at HLF 2016!
Some of the authors expected at HLF 2016: Jonathan Gil Harris, Kiran Nagarkar, Naina Lal Kidwai, Nayantara Sahgal, Paro Anand, C. Christine Fair, Jairam Ramesh. Literary sessions will be devoted to a variety of topics: environmental session ‘A Different World Order’, LGBT, Dance Panel ‘Third Eye’, a number of events for our youngest visitors. As in the previous year, HLF will feature differently-abled authors.